There are a lot of ways to show your love for Disney. Taking off on a cruise, heading to the amusement parks, decorating your home or your child’s bedroom — or how about a Disney tattoo? Nothing says SERIOUS Disney fan like getting your favorite character inked! What do you think?

I scoured Instagram for some awesome examples of folks who have done just that. Check out these lovely Disney tattoos — and tell me your faves in the comments! 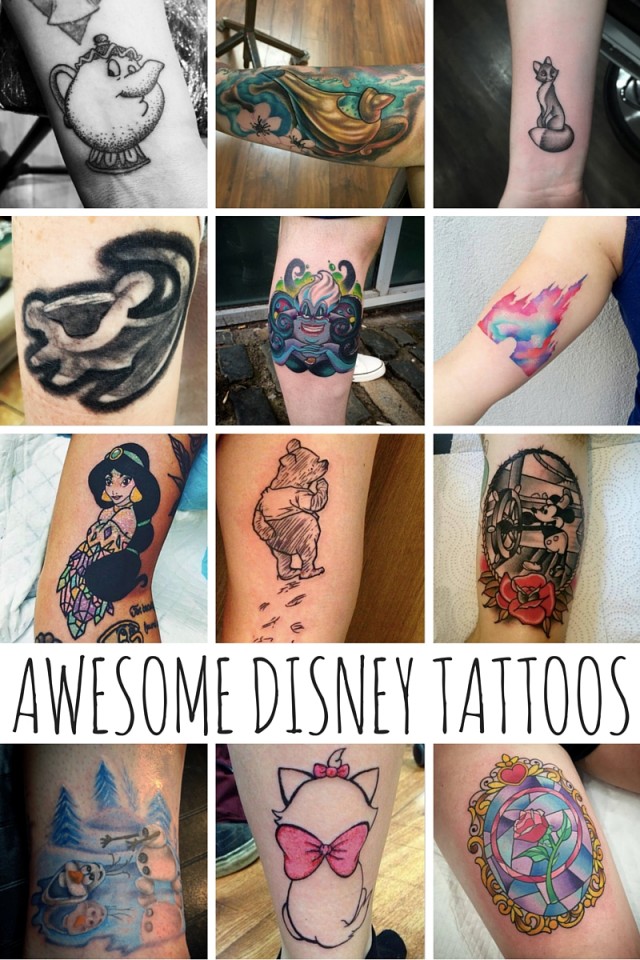 For the Beauty and the Beast fan in all of us… especially if you’re a mom who loves tea, right? Mrs. Potts is such a lovely character! (via @katieelizabeth_tattoo)

For Aladdin fans, of course, and quite possibly a tribute to the late, great Robin Williams. We’ll never forget you. (via @joshmeow)

The Fox and the Hound is one of the saddest Disney movies, in my opinion — at least from the older classics. Have your kids watched this one yet? My daughter was concerned because I always tear up! (via @piwon87)

“Simmmmba!” This might be my favorite one! The Lion King still makes me ball every single time too. I’m such a softy. (via @harnwell)

Fancy yourself a Disney villain sympathizer? Maybe you’d like to get inked up with Ursula — which makes me chuckle a little because isn’t she an octopus… sort of? (via @babyknowles)

Now your arm can be the happiest place on earth! 😉 Actually, I think this rendition of the castle is really lovely! It reminds me of cotton candy. (via @georgiagreynyc)

I love this take on Jasmine! She’s looking rather sparkly, don’t you think? Aladdin fans are going to give two thumbs up to this tat. (via @inkeddisney)

Tubby little cubby all stuffed with fluff! Hello, Pooh Bear! This little guy is such a big part of so many of our childhoods. A perfect choice for a Disney-inspired tattoo. (via @rafaserranotattoo)

Love old-school Mickey Mouse? This one’s for you. Head back to the original and commemorate a mouse that’s been living in our hearts for ages. (via @thebestspaintattooartists)

Hello, Olaf! Show your love for this quirky Frozen star by tattooing his smile on your arm! (via @livingarttatts)

Everybody totally wants to be a cat. Show the world, with this sweet little Aristocats tattoo. (via @hauntedhooligans)

When I was in grade 6, we all went to see the live-action Beauty and the Beast in Toronto and it was AMAZING. I could definitely see getting the rose tattooed on my own skin! (via @disneytattooart)

So, what do you think? Would you ever get a Disney tattoo — and if so, what would you get? 🙂

Désirée is the Canuck mama behind So Fawned Lifestyle. Blogger, social media wrangler, go-to girl. Living the life with her partner Rich and awesome daughter Gretchen, she spends her days typing and drinking copious amounts of tea, and watching Gilmore Girl reruns.