Isn’t Instagram a totally and completely wonderful thing? You can instantly share images and snapshots that, with the modern smartphone, were hard to capture in the past. 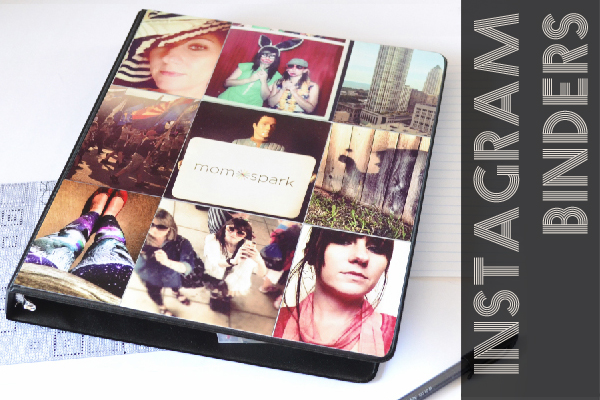 Now armed with our handy dandy cellphones, we can snap some of the most amazing things that happen on the fly simply because our phones are ALWAYS with us.

As a little example, I’ll share with you my favorite Instagram snap that I’ve ever, ever taken: 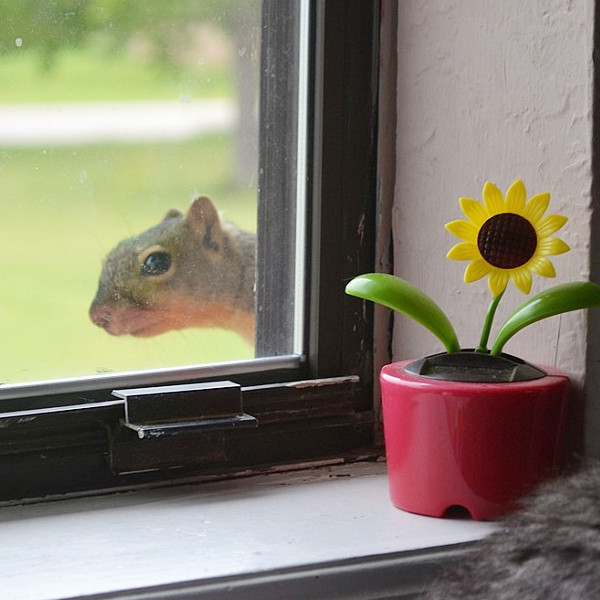 I was working on my computer when a squirrel popped his head near my window to sneak a peek inside of the house. Because I was sitting with my phone not but an inch or two away from me at the time, I was able to capture a pic of that little fella’ scoping things in my office out. Now pre-smartphone days I’d have told everybody that a squirrel peeped my window and nobody would have believed me… But back to the task at hand.

Since school’s back almost everywhere now’s as good a time as any to make some super cool binders. And what’s cooler than anything right now? Yup, Instagram photos. 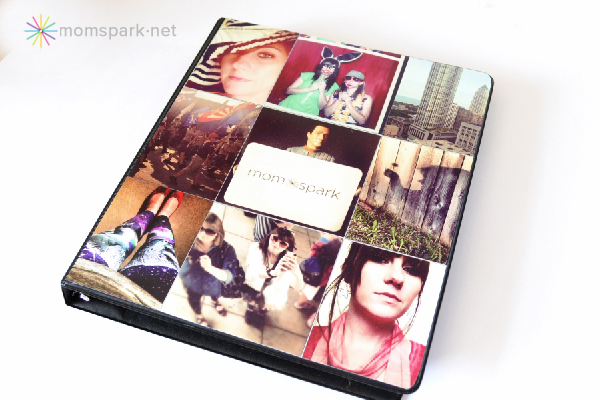 Browse someone’s Instagram account and you can learn a lot about them. Me, I’m a crafty cat lady. Every picture has a cat or craft project in them (I’m pretty much serious). You can tell if someone is athletic because they are snapping pics just after a hike, or a foodie because they’re always taking pictures of their meals, or if they’re fantastic and a weensy bit self-obsessed taking pictures of themselves with no shirt. So how in the world could you make something more you than by adding your Instagram pics all over it? 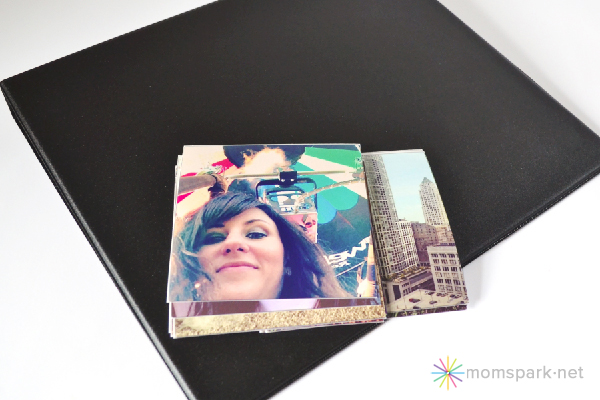 First, you’ll need to print or get printed your Instagram photos. If you need help with that, I shared a tutorial on my blog yesterday for using Walgreens to easily print 4×4 Instagram pics. You can also print them at home!

The binder I chose was $0.97 at Walmart. The tag said it was an “economy binder”. You don’t need to buy one with the clear plastic sleeves because we can’t glue our pics onto it, so get one that is just a straight-up binder. 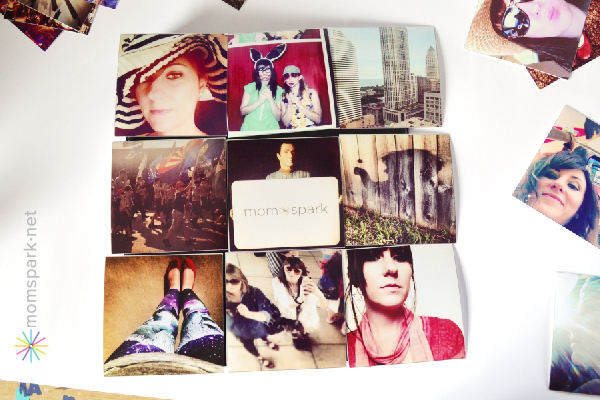 Take your pics and play around with the layout you’d like on your binder. The only picture that won’t be trimmed down is the center pic so take that into consideration when choosing images for around the edges. I actually laid my pics straight onto the binder so I could easily see the overhang and tell right away if the pic would work or not.

Now, you may recognize that lovely lady up above! Since my pics are, as previously stated, almost all cats, I thought Amy’s pics would make a far more interesting binder! 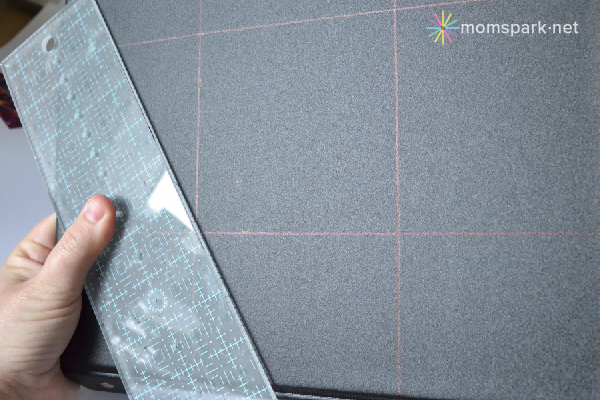 This step isn’t 100% necessary but I’m the child of an engineer and therefore a perfectionist. Using a black permanent marker and a ruler mark out exactly where the images should go when glued down.

You can always eyeball the placement but this way you’re 100% sure that things are going to line up nice and straight when you’re done gluing everything down. 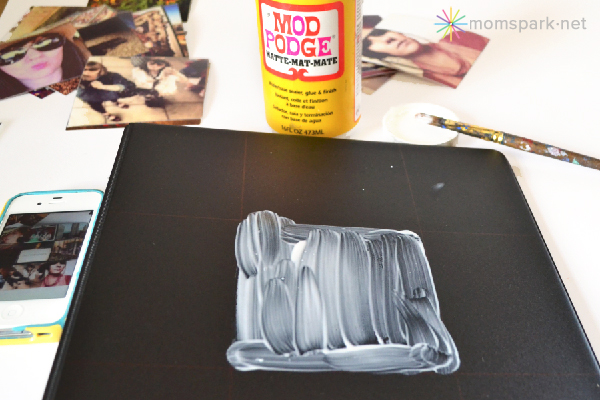 Use your bristled brush to spread Mod Podge inside of the center square.

And check out my phone to the left of the binder. I took a pic of the placement as I wanted it so that when I forget (and I always forget) I’d still be able to have the pics exactly as they’ll look best. 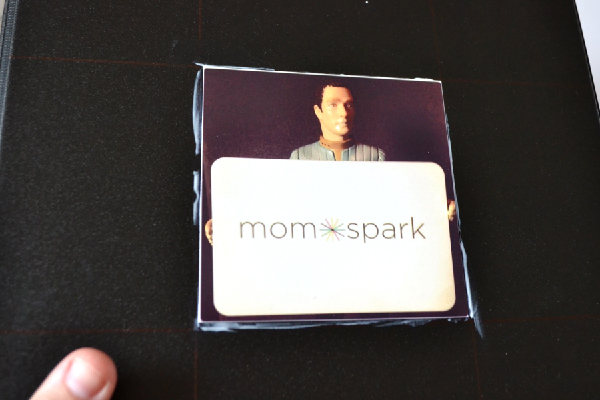 Place the picture and if you drew guidelines, use them to make sure the pic is nice and centered. Set to the side and allow to dry. 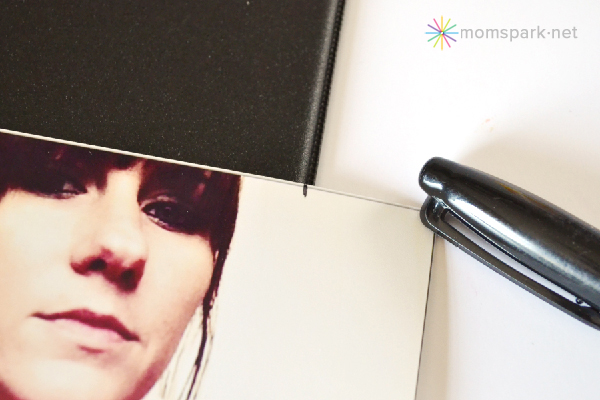 Did you let your center picture dry? If not you’ll risk accidentally bumping it out of place and messing everything up!

If you’re ready to move on, place your next image where you want it to be. You can start anywhere but I started with the bottom right corner.

Bump the picture up against the center picture (here it was corner to corner) and make sure the image is sitting straight. Use your marker to mark where you need to trim the photo so that it fits. 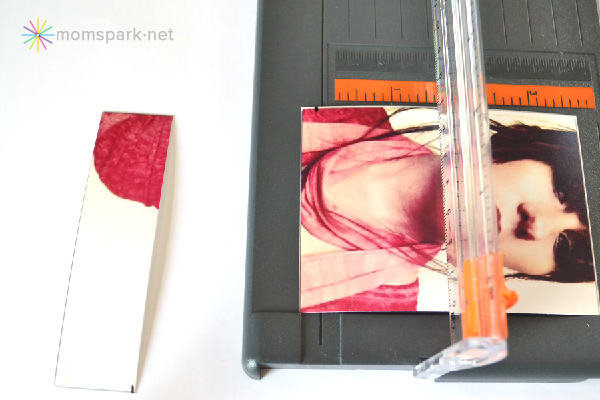 Trim accordingly, paying special attention because images can be kind of slippery when cutting… 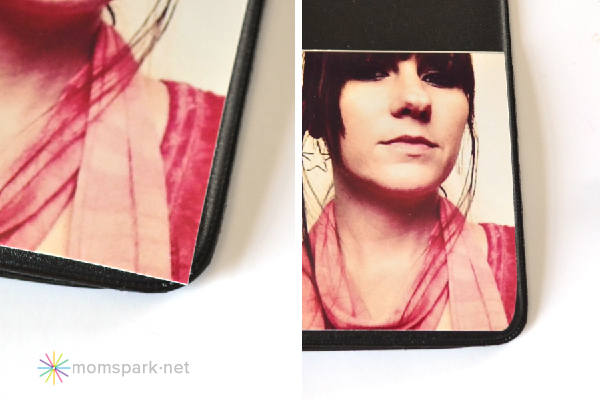 The corners of binders are rounded. You’ll need to grab your scissors and trim a rounded corner onto the image. Place the pic where it will go and use your marker to trace the shape of the corner just outside of where you’ll want it to be. Use your scissors to follow the curve cutting just inside of the permanent marker. 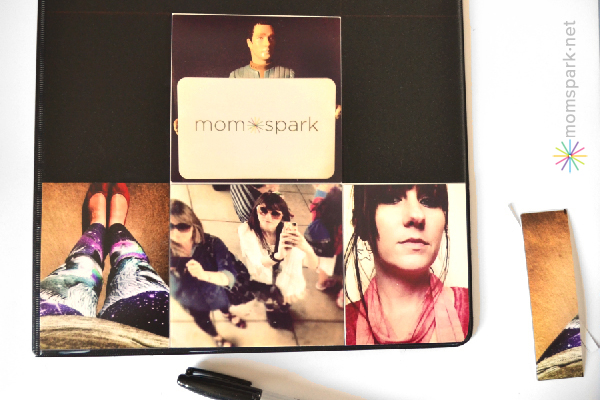 Keep gluing down images. It doesn’t matter how you go about it. For the front, I went right to left, top to bottom. For the back, I just went with no pattern and it worked just as well. 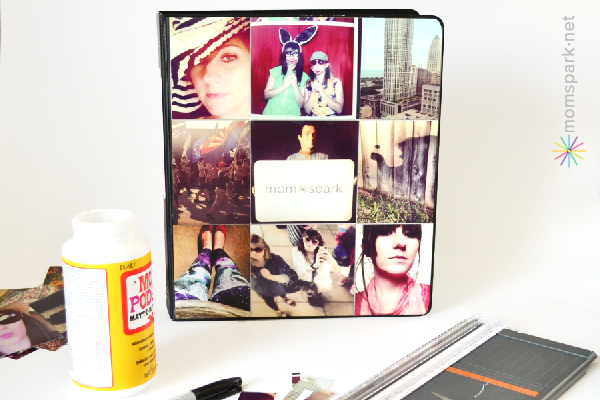 When the front is covered completely set it someplace to dry until you’re confident that the images won’t move around on you when working on the other side. 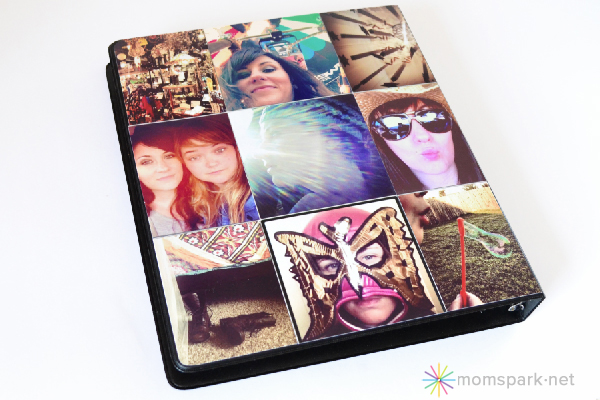 Cover the back with the same technique as you did the front. You can also cover the spine. I chose not to because the weird, indented button things had me worried that the pictures would eventually cave over them and look funny.

Let the binder dry FULLY or at least 4 hours. 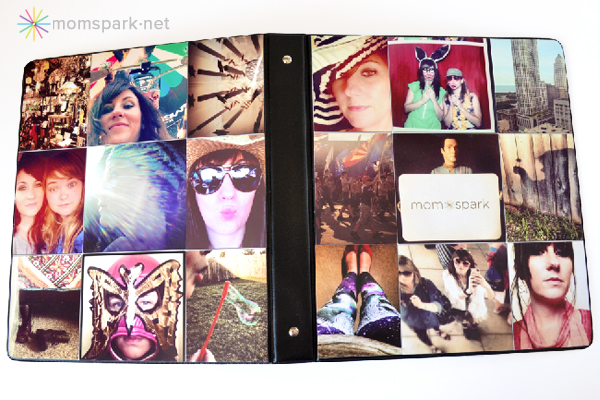 Now we’re going to seal the binder with 2 coats of Mod Podge. You can choose matte or glossy depending on what you like. I went matte.

Cover with very thin layers allowing it to fully dry in between.

If you didn’t let the binder dry all of the ways, you might see bubbling in your pictures.  You can try using a Mod Podge squeegee tool to smooth out the air bubbles if they pop up. This works most of the time but your image may see some creasing as a result. 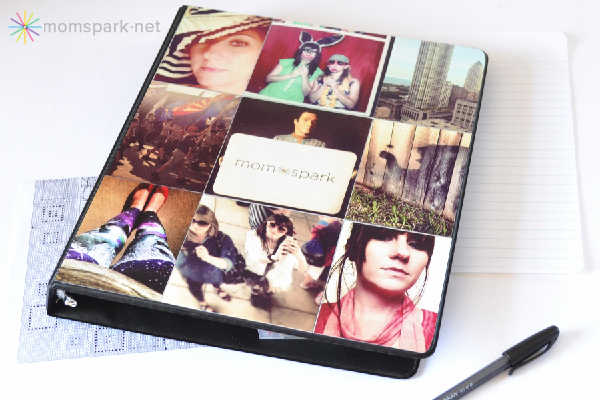 And there she is, Amy’s new custom Instagram binder! Since I chose from Amy’s account, I had to guess which images would mean the most to her and if you’re making a gift that’s the way it’ll have to be. Just know that people don’t typically share pictures they hate on a social network with millions of users!

In the end, there are some images that aren’t perfectly aligned but it works out okay in the end. The biggest thing to remember is drying time. If you let your project dry fully your binder should look every bit as great as the one in this post.

Will you be making your own Instagram binder? What type of pics will you have covering your new office/school supply?

posted in: Arts and Crafts, diy