When I was a kid I probably got my dad 100 red ties with little “snails” on them. For some reason, it is what I thought said “Daddy” most because, well, he’s an engineer. My sister always got a tie with a cartoon character or crazy abstract painting kind of a thing. For the vast majority of his career, he wore neckties

, so the purchase wasn’t totally out there. And while he may not have worn the ties we gave him every day, he wore each of them at least once. Because he’d rather wear the Tazmanian devil and get teased by colleagues than let me or my sister down. 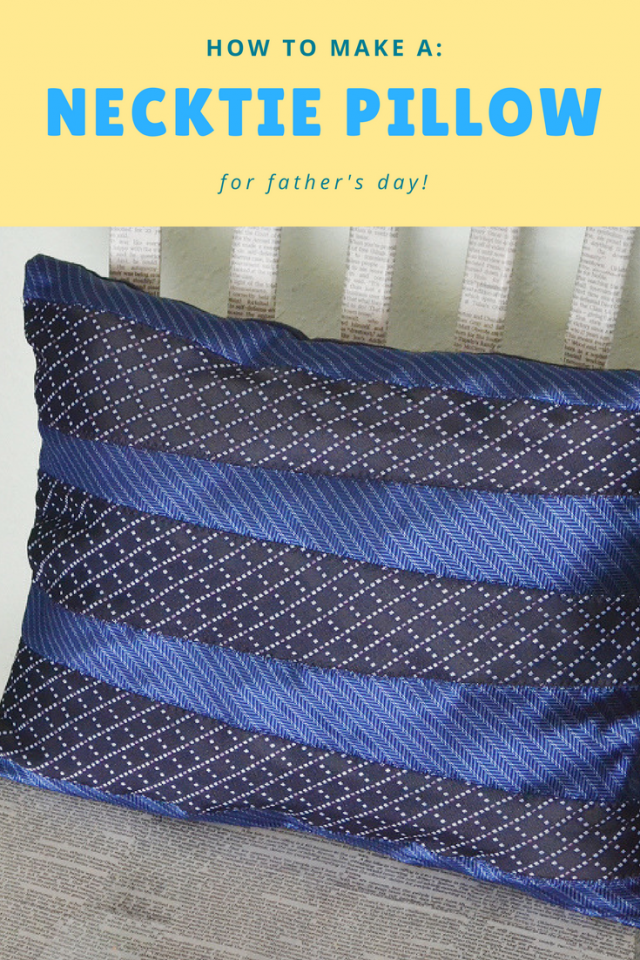 That’s the way dads are, aren’t they? They’ll do anything for their kids and they don’t really require much which makes them hard to shop for. If my dad wants it or needs it, he gets it. And considering he doesn’t want or need much these days, things get even more difficult to contend with. And while these days my father is retired and probably only has one tie in his closet for funerals, I thought a tie pillow would be a nice homage to the gifts of Father’s Day past. 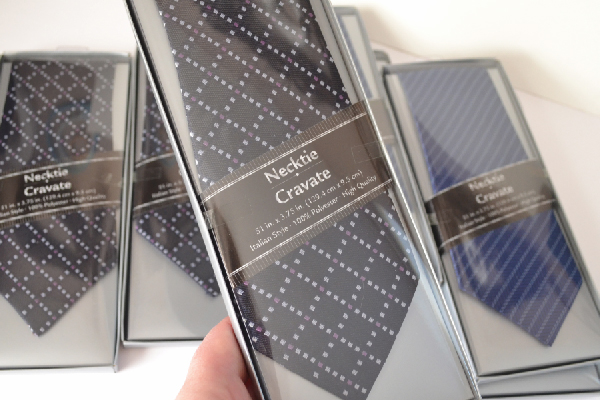 Now since I don’t wear ties myself, I had to go out shopping for supplies. My first thought was I wanted the pillow to be lots of colors with ties of all sorts, because I figure that most of you will be able to go and pull a few unworn ties out of dad’s closets and they may not all match. But imagine my surprise when the thrift store wanted between $5 and $10 for ties that were a good decade old (or older) and in awful shape. Nuh-uh I am not having that! As it just so happens, the Dollar Tree had neckties for a cool buck apiece. And while the selection wasn’t insanely great this close to Father’s Day, I was able to get enough to make an awesome necktie pillow! 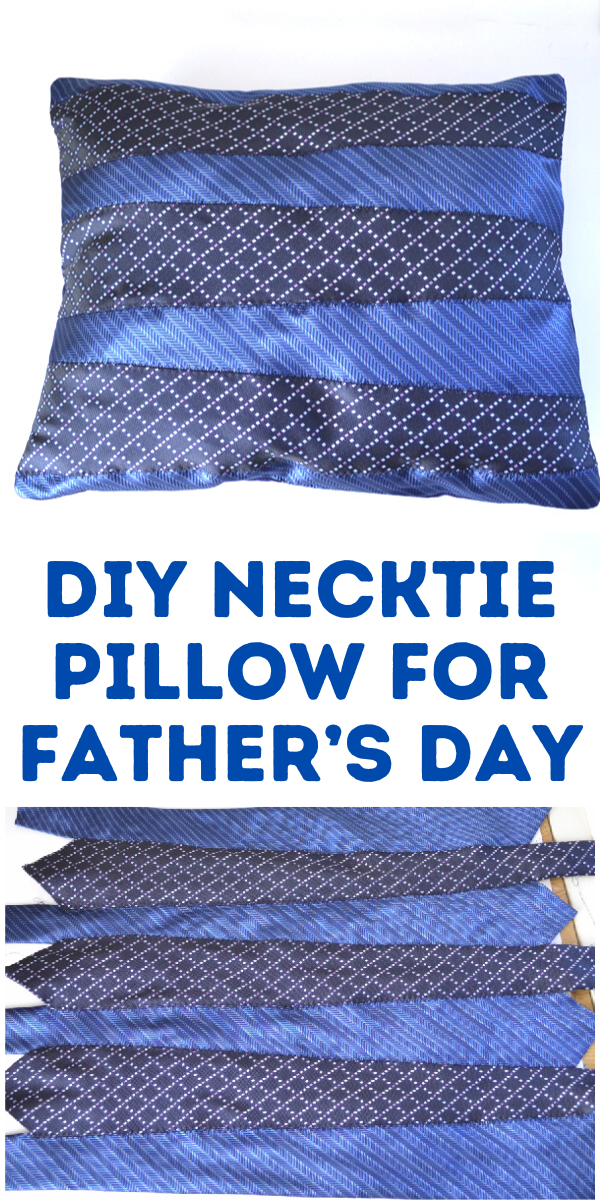 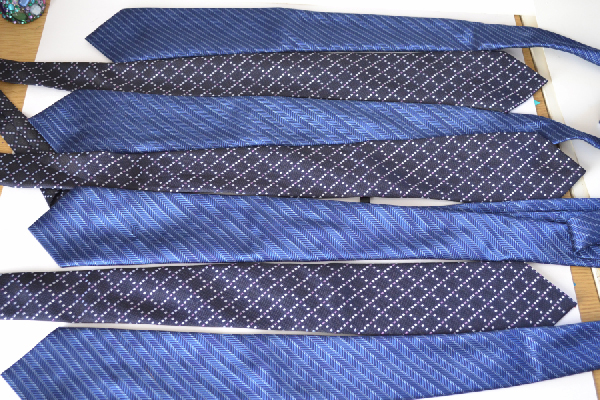 First, lay out your ties to get a good idea of how they are going to piece together. I decided to make the dark navy ties, which there were less of, go on top of the blue ties to make them more prominent and hopefully even things out. 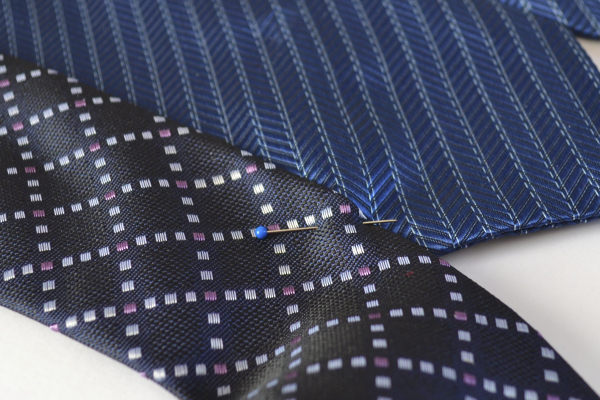 Take and pin your first tie onto the other, slightly overlapping. 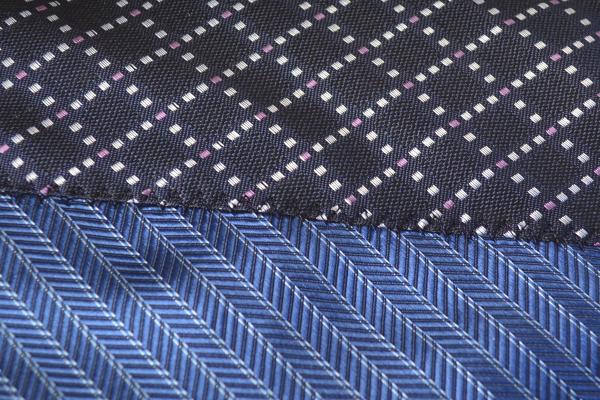 Use a zig zag stitch to attach. Be sure to use a thread that matches well so your stitches aren’t the most noticeable thing about your pillow. 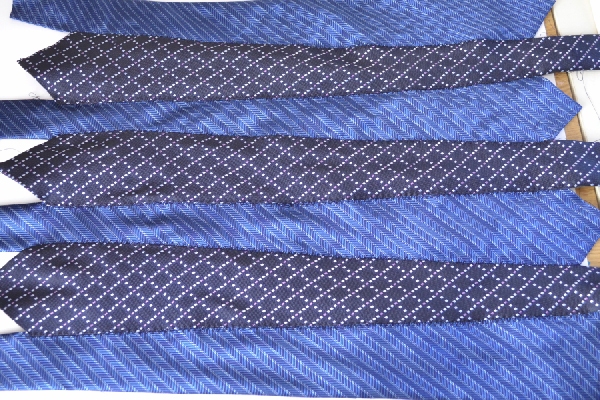 Continue stitching together until you have one piece with all of your ties attached to one another. Take your backing piece of fabric and put the pretty side of your ties and fabric together. I used navy to keep with the whole blue theme. 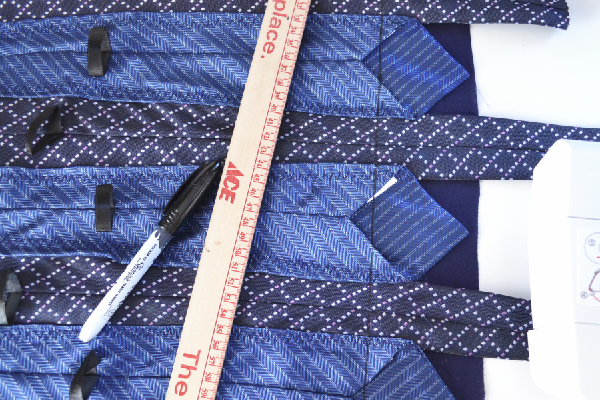 Use a yardstick if necessary to draw out a line to sew down to make your first side. Sew, trim the excess, and then mark the next side, continuing to form a square (or rectangle) shape for your pillow. 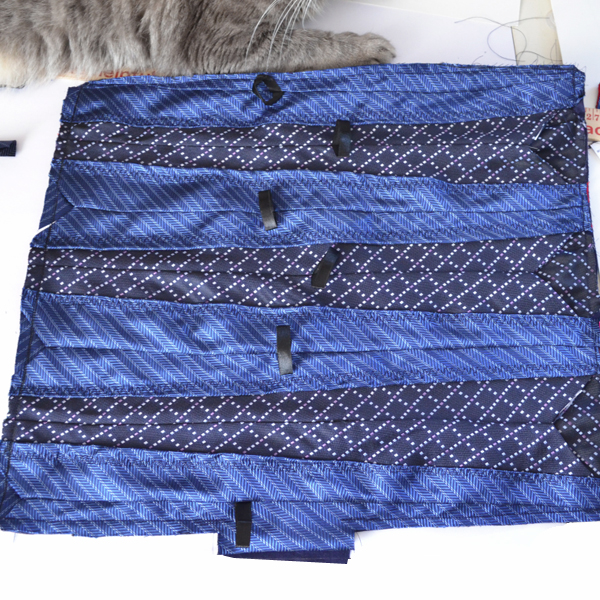 When you get to your last side, leave a slit a few inches wide to stuff your pillow through. Trim the excess fabric and cut the corners at an angle. 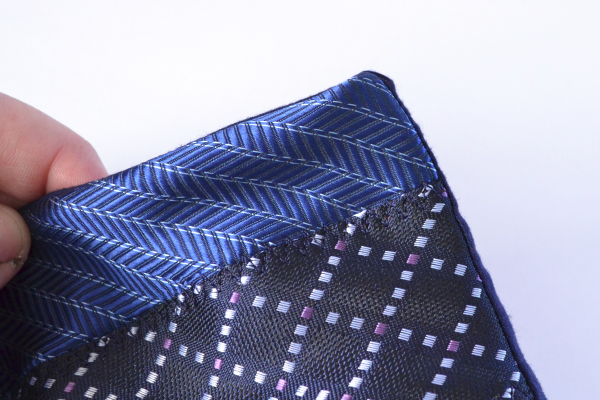 Turn your case right side out and use something to jab the corners into being as sharp as possible. 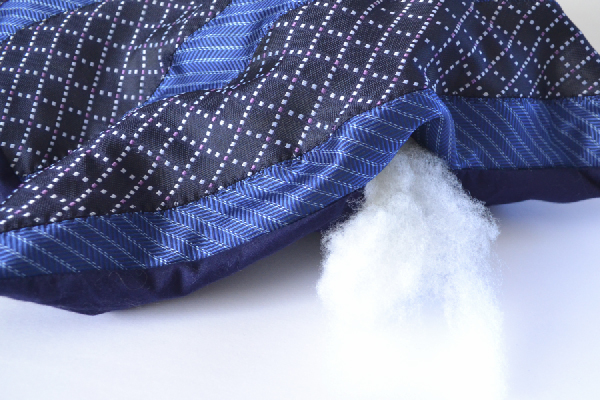 Stuff your pillow accordingly. I ran out of stuffing so mine is kind of flat, but I’ll fix that after my next trip to the craft store! 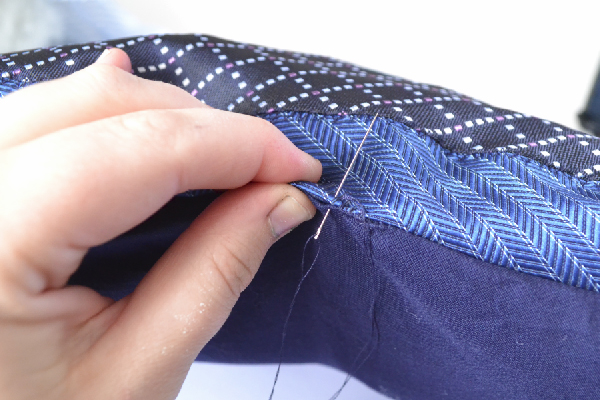 Use your matching thread, and turning the excess fabric inward, stitch the pillow shut. 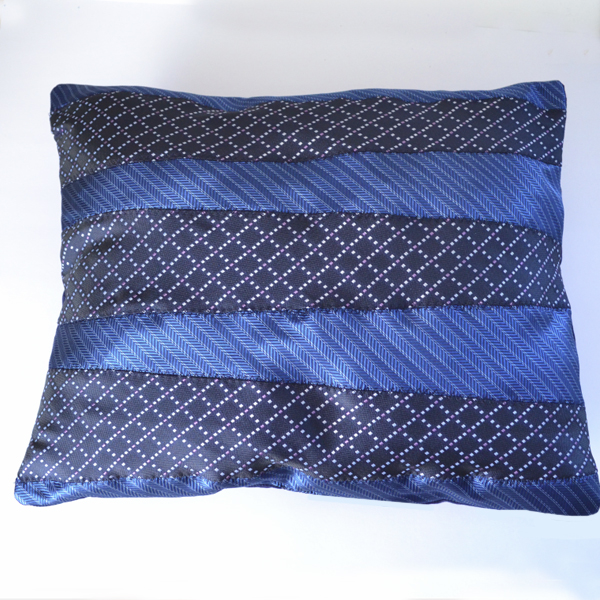 And there it is, all finished up. Again, mine is lacking the necessary stuffing to give it a nice, full look, but what can you do? I’ll fix it up ASAP! 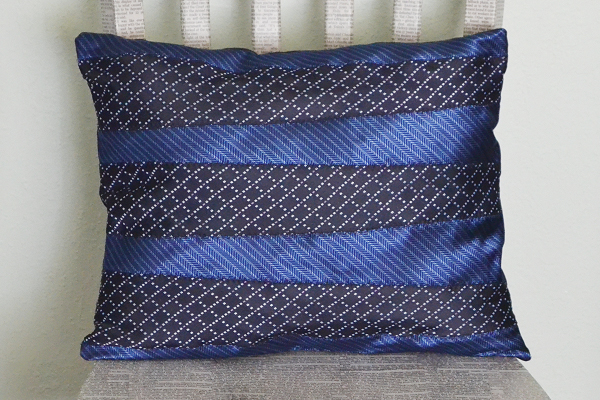 At first I didn’t like the shininess of the fabric, but after a while, I’m totally digging it. 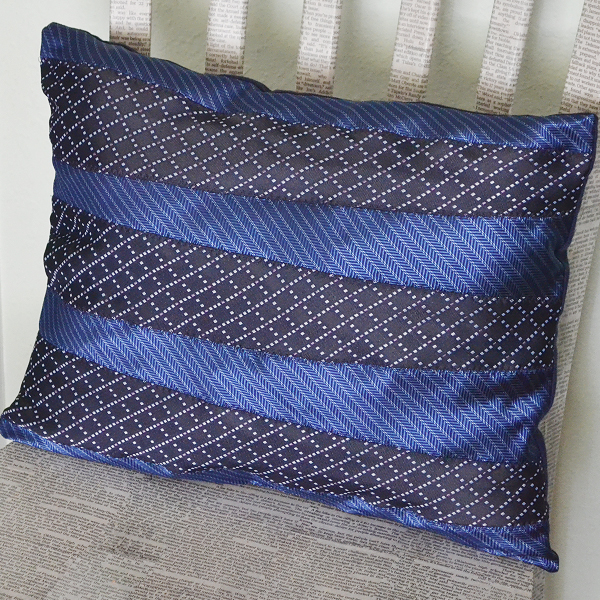 Either use ties that haven’t seen the light of day for some time from Dad’s closet, or buy some just for the occasion and match with Pop’s office, study, or man cave!