What to do in Florida: Disney’s Hollywood Studios at Walt Disney World Orlando {A Guide Around the Park}

The first day of our Orlando journey was spent at Disney’s Hollywood Studios.  My son and I had visited the Disney World parks twice before, so we pretty much knew our way around the park, which was good because the Orlando folks let us loose! 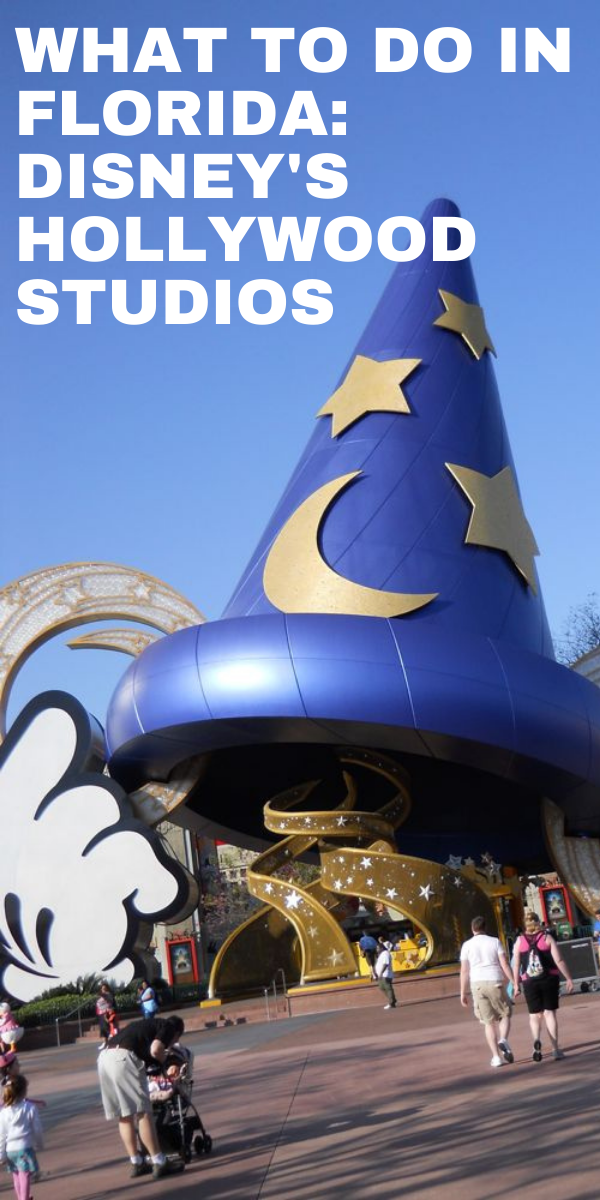 We were given three anytime fast passes, which really came in handy during a very busy spring break. 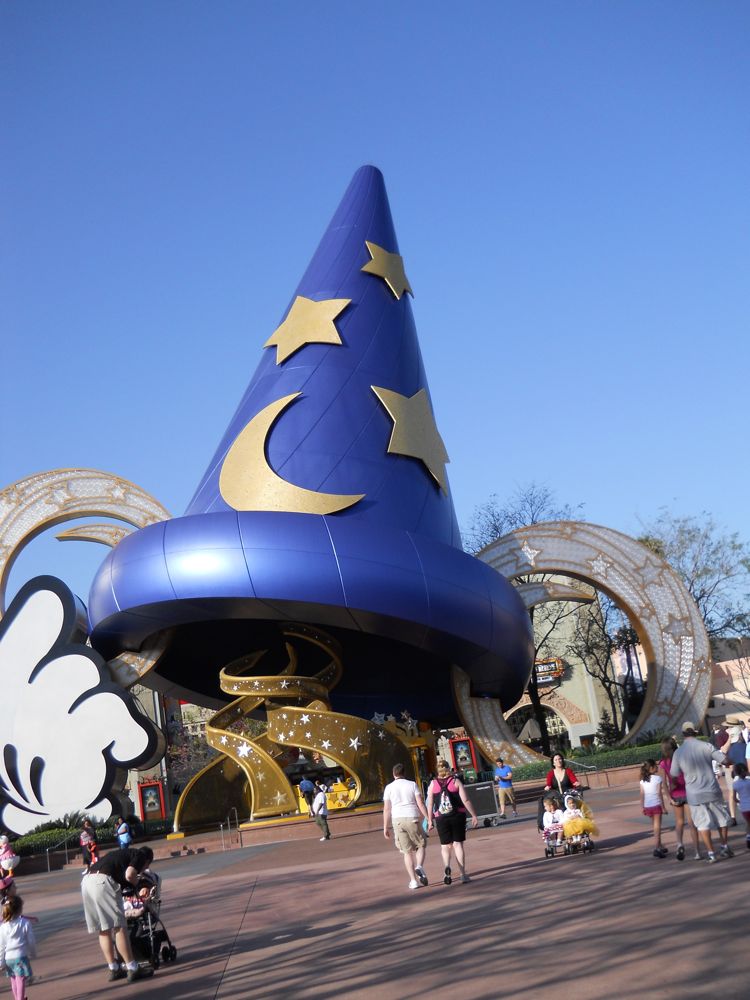 In this post, I will cover all of the rides, shows, and dining we hit at Disney Hollywood Studios that day, as well as others I’ve experienced in the past.  I do not have an image for each attraction, but the titles are linked to the Disney World website so you can see more.  Attractions marked with a “♥” are my personal favorites, and I will also include helpful tips throughout the post.

As soon as you enter the park, visit the kiosk that contains the maps and show times.  This will help plan your day at the park. 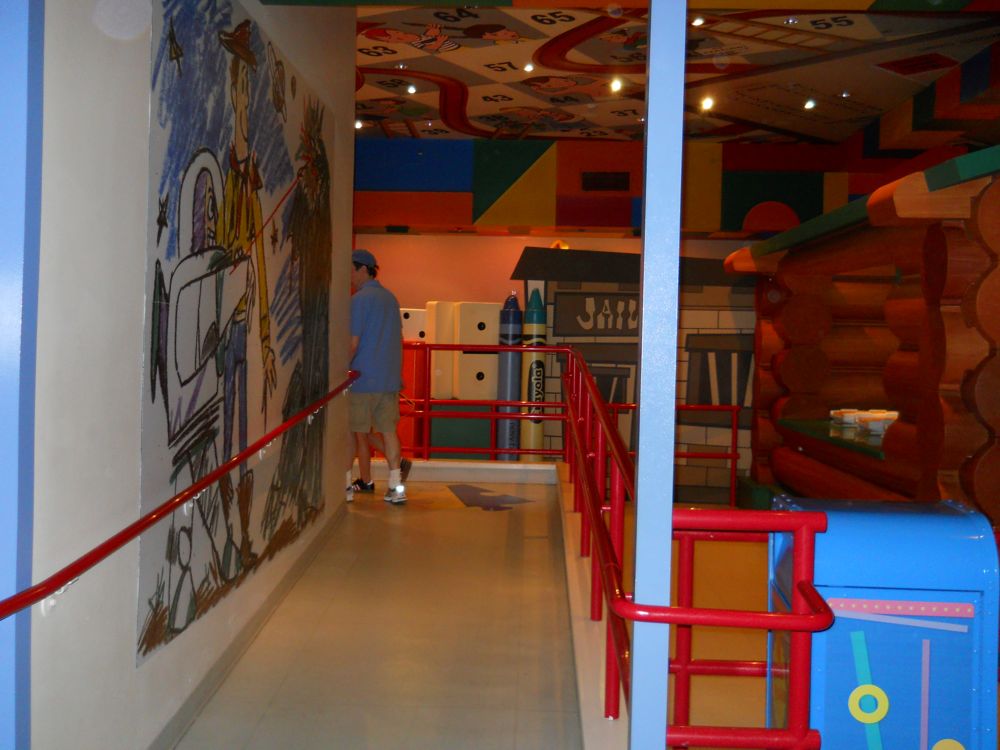 Toy Story Mania! was a brand new ride when I visited Disney’s Hollywood Studios back in 2008, and for whatever reason, I didn’t get to ride it, but my son did.  After hearing about the concept of the ride, I really wanted to hit this one first!  The ride is similar to the Buzz Lightyear’s Space Ranger Spin at Magic Kingdom in that you shoot at targets, but it is in 3D  (you wear 3D glasses) and is in a carnival-type style.   You also get that “4D” experience when you feel air rushing by and water spritzing in your face.  You get points as you hit targets, so you can be a little competitive as well.  I was impressed with the 3D technology and how real it seems when you are participating.  It quickly became one of my favorite Disney World rides.

You will want to grab fast passes at your favorite rides at Hollywood Studios, especially if you plan on riding them several times.  Please keep in mind that you are only able to get so many fast passes at a time, so check your fast pass tickets for instructions.  For more info on how fast passes work, click HERE.

Like Toy Story Mania!,  I had missed out on The Rockin’ Roller Coaster ride last time as well.  We headed over to the ride right after Toy Story Mania!, which was quite a trek, but we wanted to head over before it became too crowded.

There are helpful online planners and software for scheduling your days at the Walt Disney World Parks.  They include exact times and days that are best to visit, when to get fast passes, and even what order you should get in line for rides.  We used a service like this for our very first visit, and it was so nice.  Disney World is extremely overwhelming for a first time visitor, so it’s comforting to have a schedule to follow to avoid wandering around aimlessly.  I recommend RideMax or MousePal.

My son rode The Rockin’ Roller Coaster during our last visit and loved it, but he was a little scared to ride it again.  I convinced him that if he enjoyed it last time, he would again, but I had to really convince him!  I knew that the coaster was very fast, so I knew what I was getting into, but man, was it intense! My ten-year-old loved it, and I did as well, but I wouldn’t want to ride it too many times in one day.  I actually had a headache when it was over!  Perhaps I’m getting too old for rides like these. 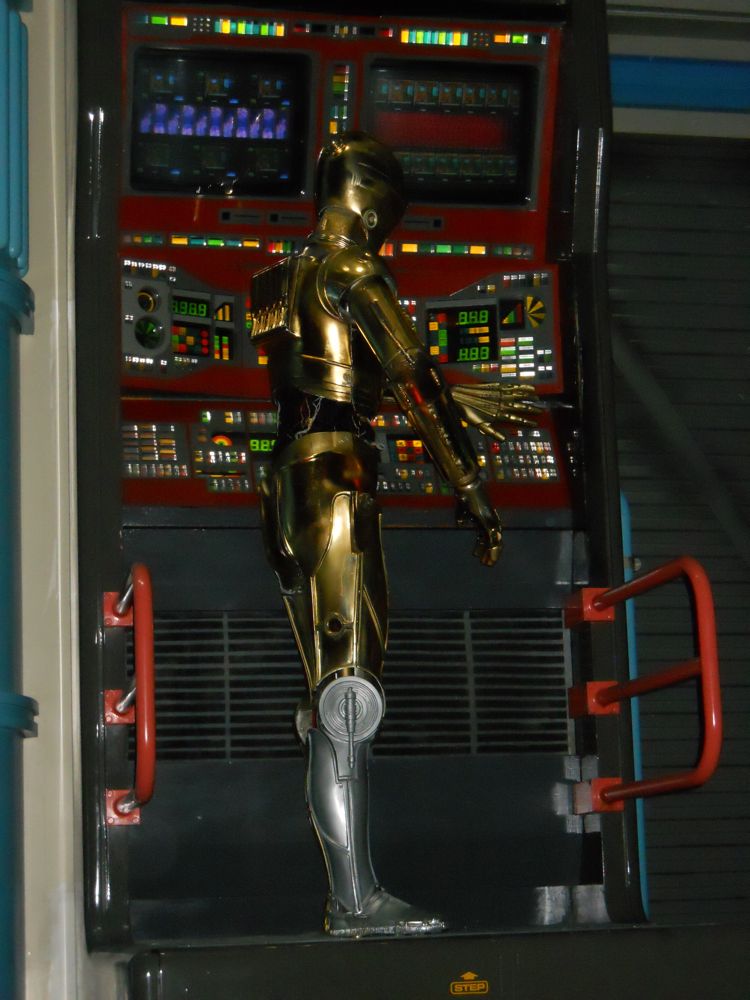 The Star Tours virtual ride is something my son always likes to do at least once while at Hollywood Studios.  It is somewhat tame, but if you get easily nauseated by 3D or virtual rides, you may want to skip this one.  The ride does move and is a little jerky.

When attending amusement parks, I take one Less Drowsy Dramamine pill an hour before going.  It enables me to enjoy most rides, especially 3D and virtual rides, without any nausea or drowiness.  The pill container is also small enough to fit into a pocket or small purse.

Basically, you are “flying” through space, avoiding large meteors and ships.  Star Tours is a little outdated and desperately needs updating, but boys love it just the same. (UPDATE: Star Tours has been updated!)

This is a ride that you can easily get on any time of the day because it’s a little old and not a real popular attraction.  The building is neat because it’s a reproduction of Grauman’s Chinese Theatre.  The ride is relaxing and takes you through the history of movies, including a little live-action as well.  Overall, it is tame, but the Alien portion seemed to scare the little ones, especially girls.

The Lights, Motors, Action™ Extreme Stunt Show only plays a couple times a day, so make sure you plan your schedule around it!  The show is a male’s dream, so it will be a big hit with your son or husband.  It consists of various car and motorcycle movie stunts that are, quite simply, cool.  The show is over 30 minutes long, so consider that when taking babies or smaller children.  It’s also loud, so be prepared.  My son and I LOVED it. 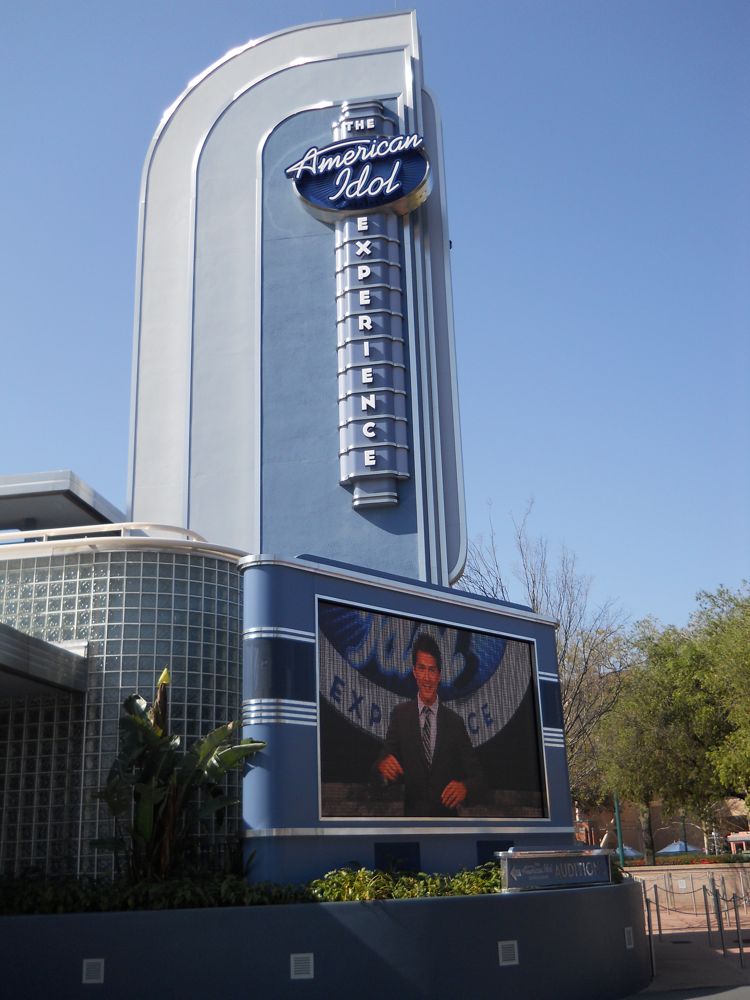 If you are an American Idol fan, like me, you’ll love this show.  It features real contestants that audition there at Hollywood Studios.  In fact, our very own Carol Cain tried out, but didn’t make it.  Disney does a great job of making the experience feel real with professional video, legit stage and convincing judges.  We had a blast at this one!  Not sure that a baby or young child would sit through the entire thing, as it was around 30 minutes long. 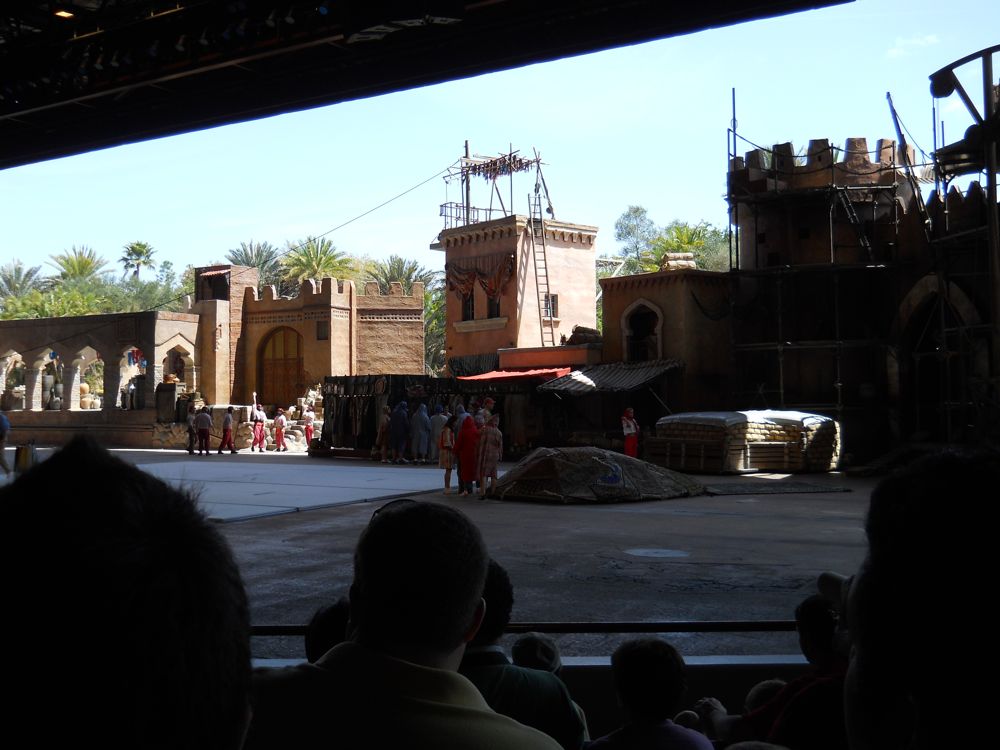 This was the first time I was able to sit through the entire Indiana Jones™ show, and I’m glad I was able to.  It is full of neat stunts that include falling off buildings, dodging fire, avoiding traps and other crazy obstacles.  Another hit for the boys.  The show is rather long, so may not be ideal for babies and small children.  I had a 8 month-old last time I tried to watch this show and he became bored very quickly, so I had to walk out.  A must-see for boys!

We love anything associated with The Muppets, so we always hit the Muppet Vision 3D show when we visit.  The wait time isn’t usually bad because the theatre holds several people.  You wear 3D glasses, but there is no movement in the seats whatsoever.  It is a hilarious, fun show appropriate for the whole family.

VOYAGE OF THE LITTLE MERMAID

We watched this Little Mermaid show during our first visit to Disney World, back in 2005.  My son was five at the time and he really enjoyed it.  It is a great musical that younger children, especially little girls, will enjoy.  Talent and props were great.

A must-see night show that features Mickey and other popular Disney characters.  We saw Fantasmic during our first visit and it is simply amazing.  You’ll see fireworks, laser light animation, and lots of other cool theatrics and music.  This show is very popular and even though the stadium holds a huge crowd, it fills up quickly.  They start seating people 90 minutes before showtime and is only available on select nights. 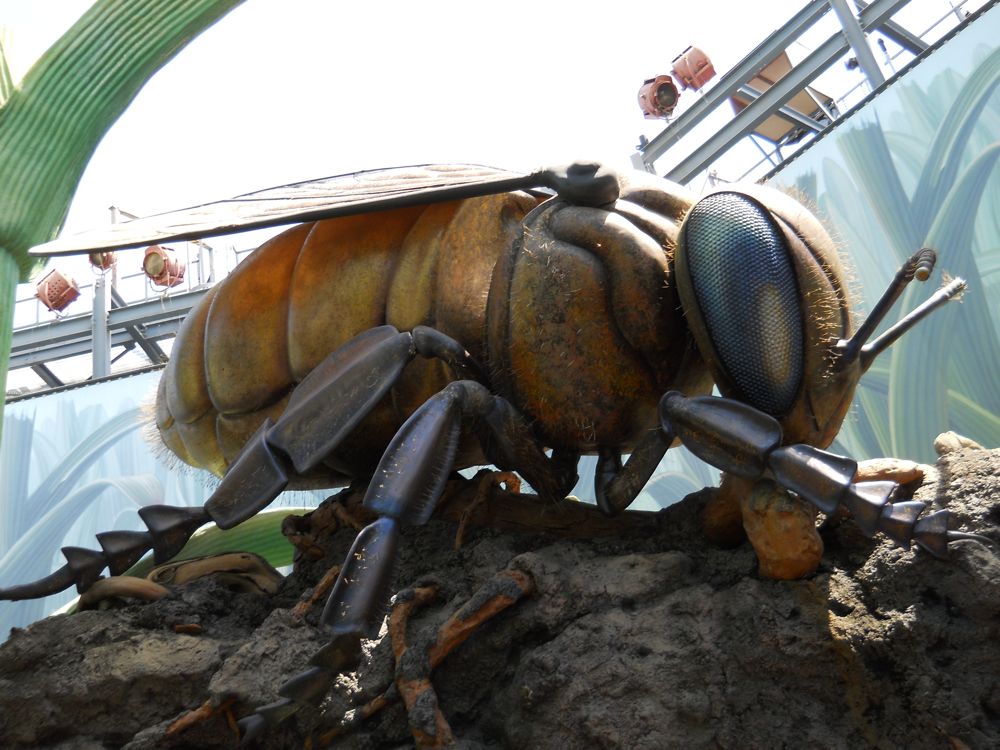 We always hit this attraction when we visit Hollywood Studios, and even at 10 my son still loves it.  My son has never seen the movie (great idea for family movie night!), but still enjoys walking around the over-sized set of large insects, grass and toys.  It is basically a huge playground with slides, climbing ropes, and water sprays.  A warning: this attraction gets very crowded with kids and there are tunnels that lead to various areas of the playground, so it can be difficult keeping track of small children.

THE MAGIC OF DISNEY ANIMATION

My husband and son did this during our trip in 2008 and loved it.  It is a 20 minute show that gives you the opportunity to draw like the Disney pros.  My son really enjoyed drawing Winnie the Poo and it wasn’t half bad, either! 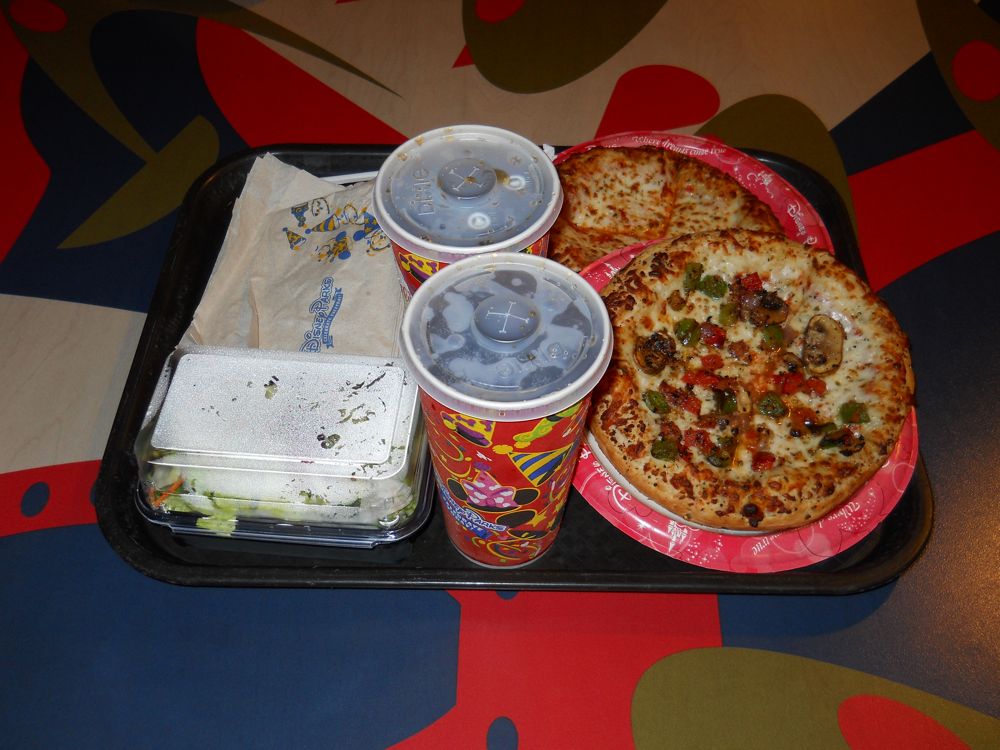 Pizza Planet is a great quick service restaurant to stop for lunch, snack or to take a break.  It’s inspired from the Toy Story Pizza Planet, so it’s full of arcade and video games.  My son and I had lunch here during our #OrlandoMom stay.  I had the veggie pizza with side salad and my son had the cheese pizza.  It really wasn’t bad at all, and my son was able to play some games as well.

Another quick service restaurant perfect for lunch, a snack or taking a break.  The ABC Commissary also serves breakfast, which is a rarity in the park.  My son and I popped in mid-day last time to get some fries and a soda.  There are tv screens throughout the restaurant that play movie trailers and the walls are decorated with movie posters.

Most of the quick service restaurants at the Walt Disney Parks and Resorts serve the same pizza, hamburgers, waffles, etc., although they may call them different names.  The good thing is, you know exactly what you are getting, so if you like the fries at one location, you’ll like them everywhere else.

The 50’s Prime Time Café is a fun 1950’s themed table service that has the most amazing comfort food, like fried chicken, meatloaf, and tuna casserole.  My family ate here back in ’08 and I had Mom’s Old-fashioned Pot Roast, which was a huge portion of tender roast beef, mashed potatoes, carrots, celery and onions.  It was sooo yummy.  The waitresses tell you to keep your elbows off the table and finish your plate, just like your mom would.  You will need to make a reservation for this one because it’s very popular restaurant.

Make all of your dining reservations months before your trip date to ensure a seat.  You can book reservations online by visiting the restaurant of your choice and clicking “book online”. 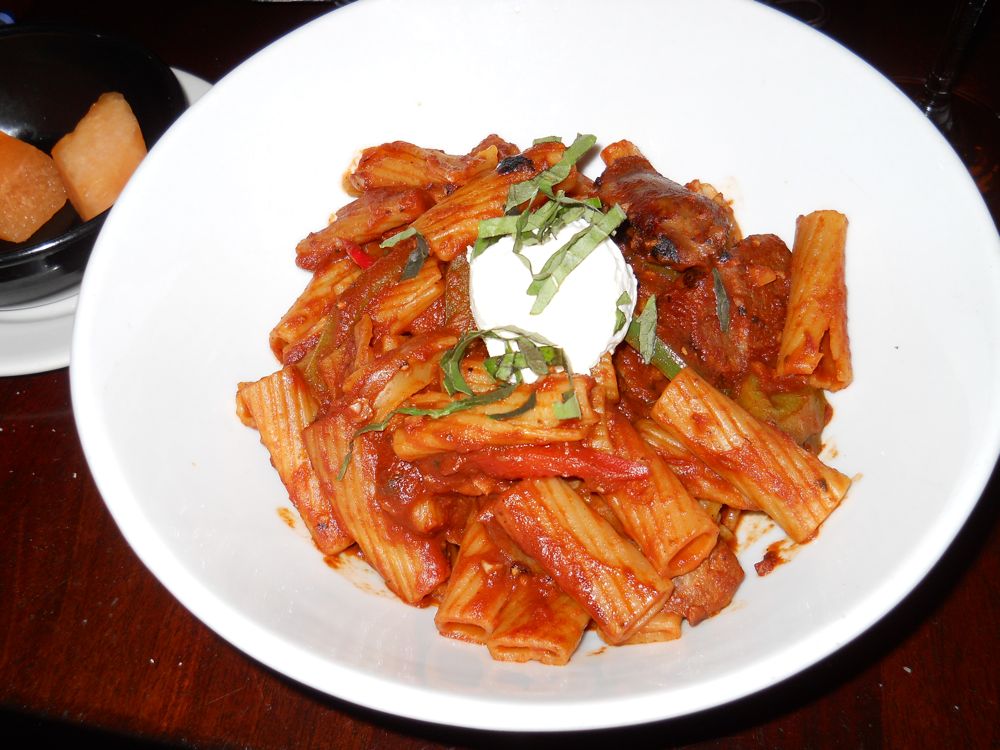 I have eaten at Mama Melrose twice now, and I must admit that the second time was much better than than the first.  Our Orlando group had dinner there, which was a nice way to cap off the day.  Our table started off with Mozzarella with Tomatoes and Bruschetta appetizers.  I ordered the Spicy Italian Sausage with Rigatoni Pasta for my entree, which was pretty good.  I was most impressed with the new dessert menu that consisted of Warm Chocolate Truffle Cake, Crema Limone, Honey-Hazelnut and  Ricotta Cheesecake, and Gelato.  I tried the ricotta cheesecake and it was very tasty. 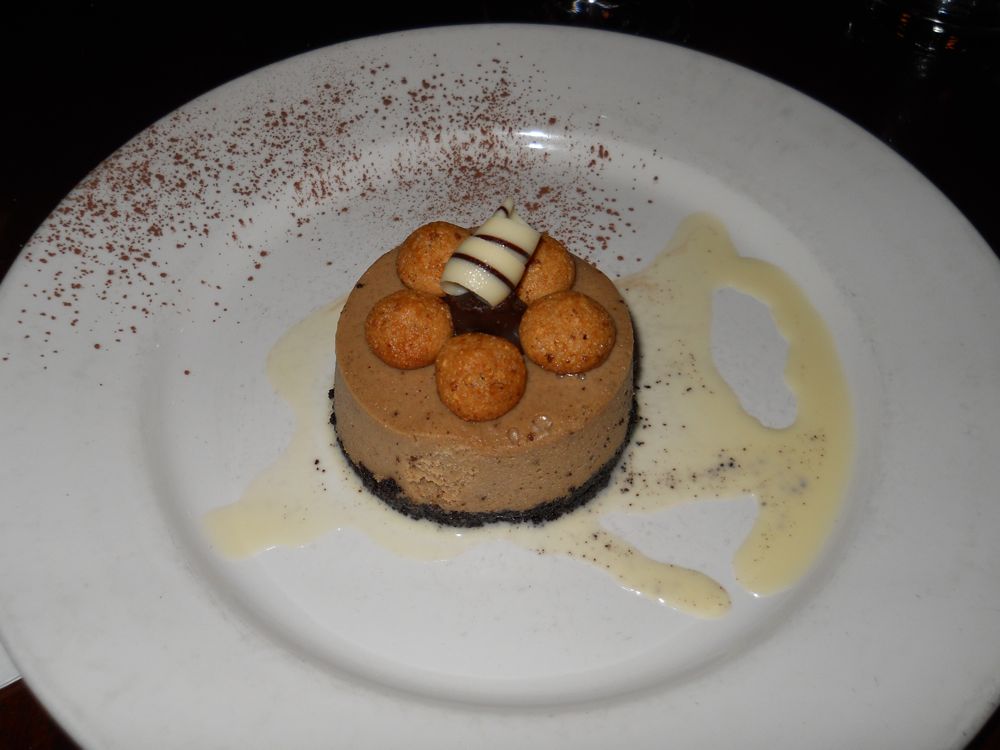 SO MUCH MORE TO SEE!

There are still many rides, shows and dining that I have yet to experience at Disney’s Hollywood Studios, so I have listed them below with links to the Disney World website for your reference.  I cannot believe I haven’t been on the Tower of Terror, which is one of the big attractions!  My son is still scared to get on it.

I hope you enjoyed my recap and recommendations of Disney’s Hollywood Studios!  If you have any suggestions, tips, or questions, please leave a comment!

« Previous PostWays To Save At Walt Disney World and Parks: Things To Know Before You Go
Next Post » Easy Homemade Strawberry Freezer Jam Recipe

9 Comments on “What to do in Florida: Disney’s Hollywood Studios at Walt Disney World Orlando {A Guide Around the Park}”