There isn’t much that I love more than a stack of bracelets. Bangles have been my thing as of late but I’ve wanted some beaded bracelets from natural stones to adorn my arm. 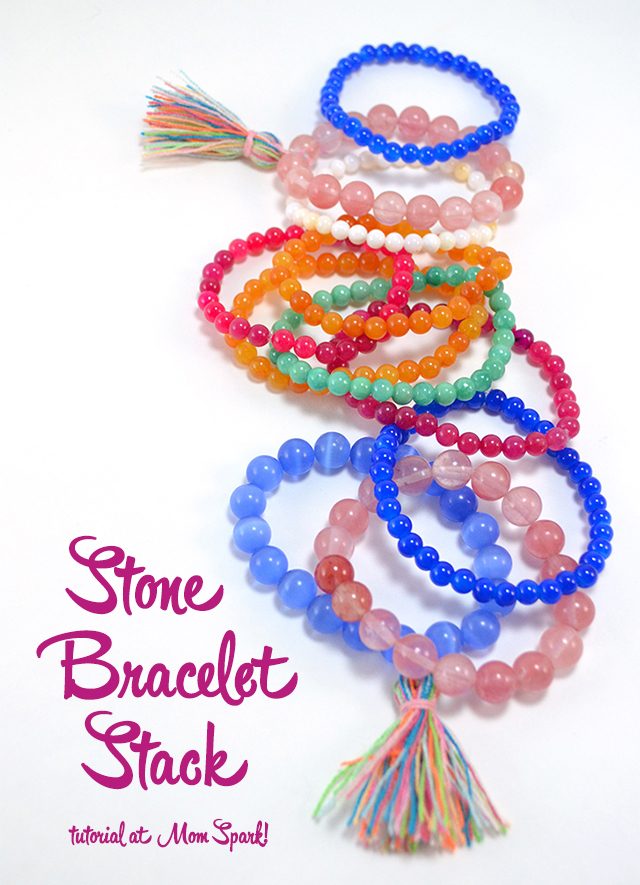 Now what I could find locally was more glass than actual stone but with a filled-up cart online I can soon remedy that. And for now, my “stone” bracelet stack is just fine to help me fancy out my more casual look of distressed jeans, a colorful tee shirt, and either flip flops or my new addiction, Keds. 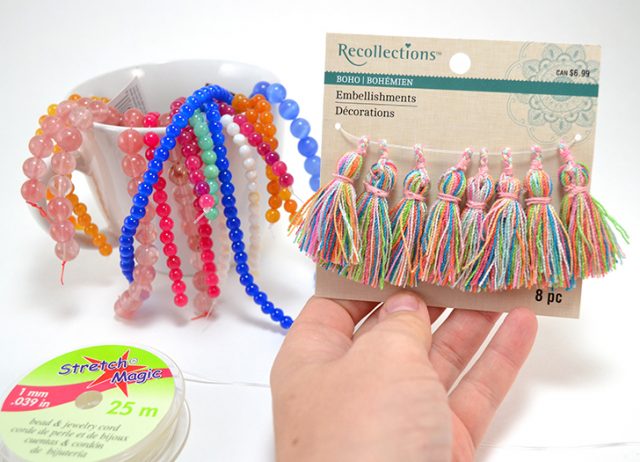 When I found some of the cutest tassels at the same store I was shopping for beads I threw them into my little hand cart and decided this was going to make my project even easier. Since they were half off I had no qualms about the purchase but pre-made tassels can get pricey. Google “how to make a tassel” and I’m sure you’ll be inundated with more tutorials than you could ever possibly need. The internet is a wondrous thing and you can find how to do literally anything. 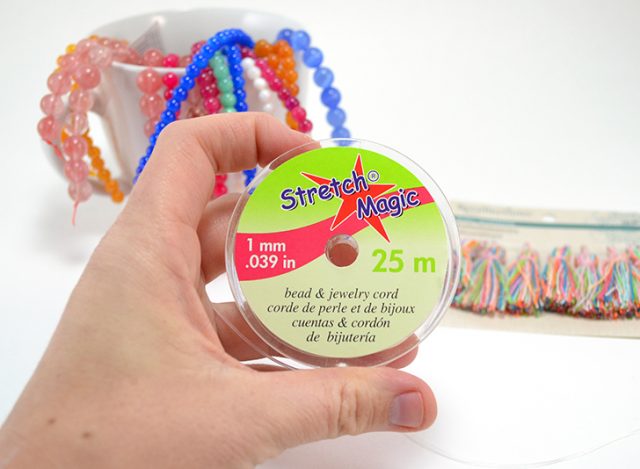 There are lots of bead cords but I prefer this one because I’ve never had the knots come undone on a bracelet before. I’m sure you can imagine what ensues when you do have a knot come undone… Beads. Everywhere. Many never to be found again. 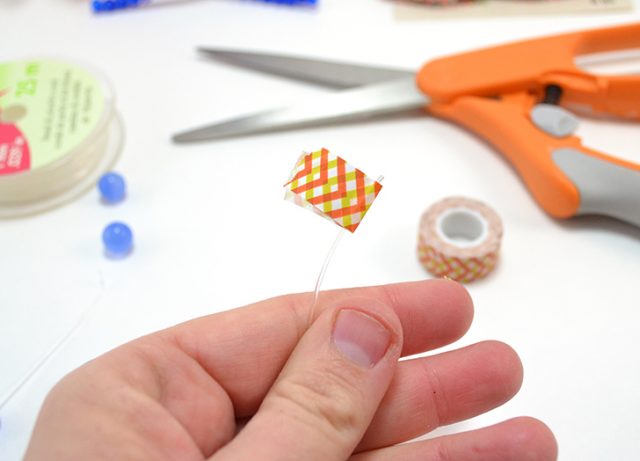 Take the end of the cord as it comes off of the spool and stretches that business out. You’re pre-stretching it so it doesn’t get all weird and floppy and lose its shape on you after it’s been worn a few times. Stretch that business as you mean it!

Trim enough off of the end to easily wrap around your wrist, plus an inch or so of extra. Place tape at the end of the cord. This will be our bead stopper so we aren’t chasing beads everywhere later. 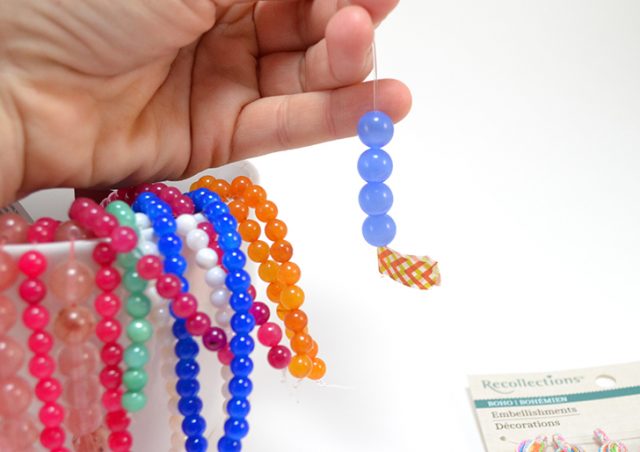 String your beads on easy as you please. See how nifty that washi tape is working out?

Now you’ll need to gauge how the length will fit around your wrist as you go. If you’re making for somebody else with smaller or bigger wrists, keep that into account. Wrap the bracelet around your wrist often and once you’ve gotten enough to go around comfortably without being overly lose you’re ready to rock. 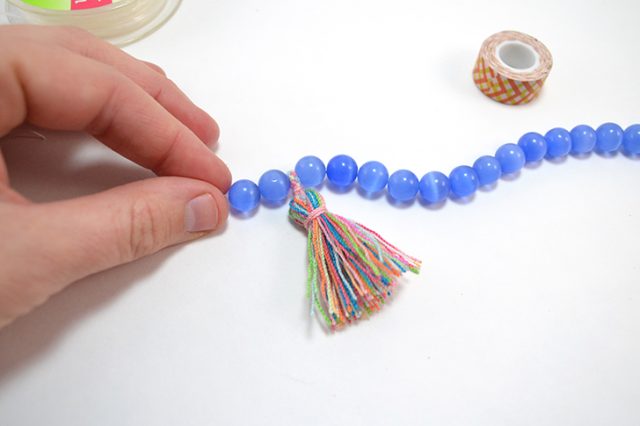 Now IF you’re adding a tassel get that business in between beads rather than at the end. 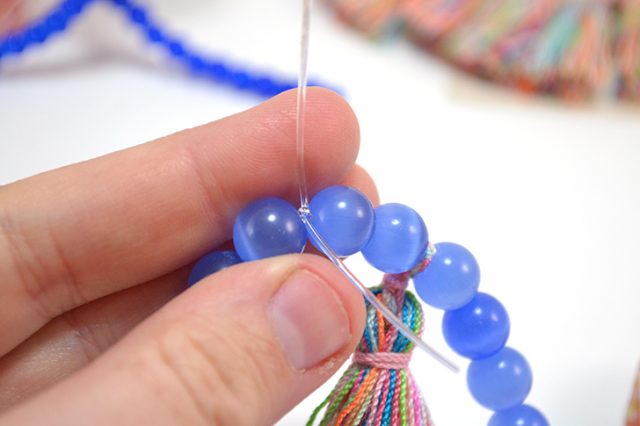 Double tie a knot very tightly to form the bracelet. 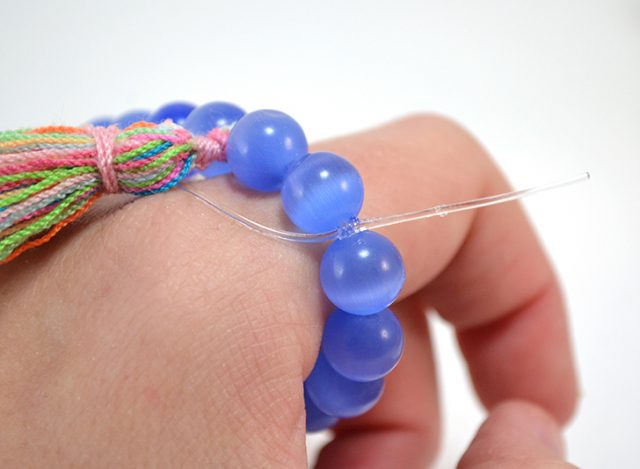 Take a small amount of super-strong glue and push it into the knot. I take a little bit on the end of a toothpick or wooden skewer. You might get it onto the beads so be careful (and if you’re tassel is on the end you’re totally going to make it a glued-up, jacked-up mess. Allow the glue to fully dry, overnight is best. 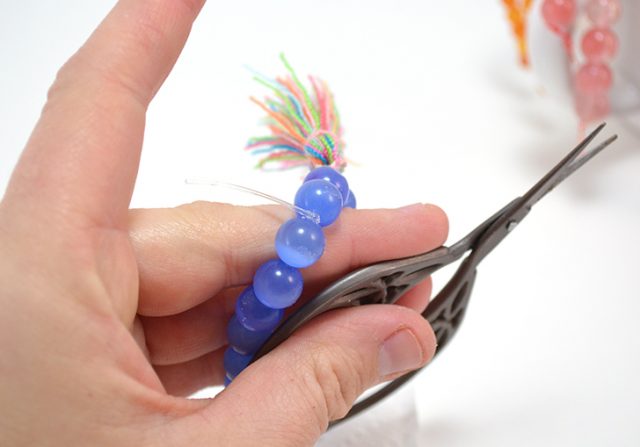 Snip the ends of the elastic near but not on the knot. You’ll want the glue to be very dry or you’ll be having some problems with your nippers very soon! 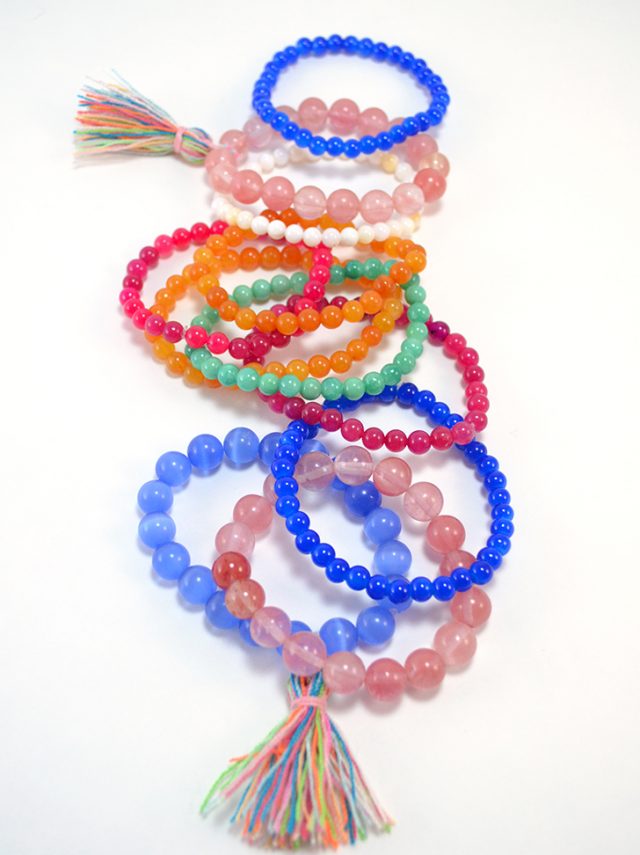 I made a whole mess in the same color scheme as the tassels I found, pink, blue orange, white. Some of the beads didn’t go as far as some of the others. For instance, one package of orange appeared the same as the green but I was just short of enough beads to make two. Darn! 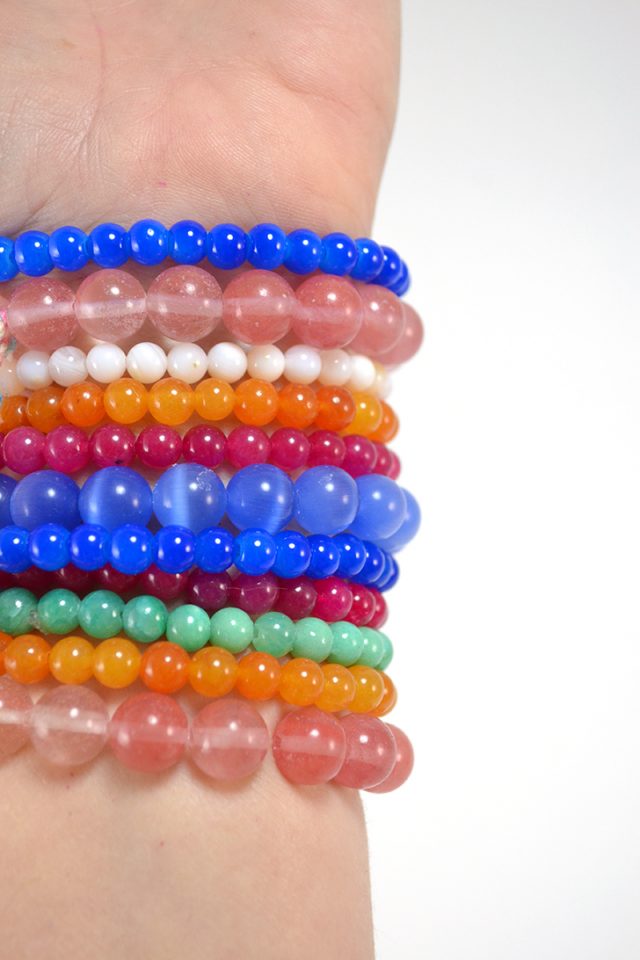 You can see the cord through the more translucent beads but that’s okay. In some areas, the glue is a bit more prominent than I’d like, largely due to me gluing these guys up while watching Bob’s Burger’s in bed with 2 cats and 2 dogs, and 1 guy 🙂 Any normal person would never notice so I’m not too concerned about it! 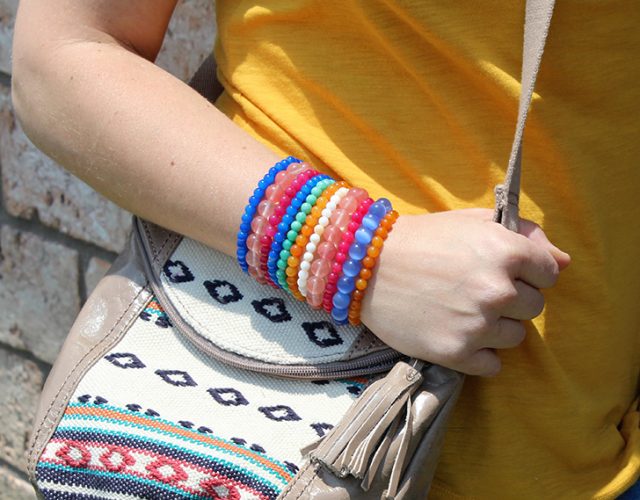 Since Rob and I needed to go to town today I tossed on my standard boyfriend cut jeans and a mustard tee shirt (I seriously have solid tees in a bazillion colors) and with my bracelets, I would perfectly read to set upon the town. 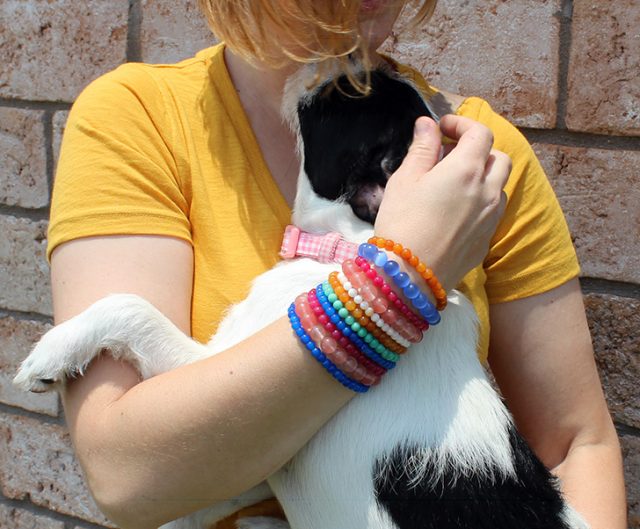 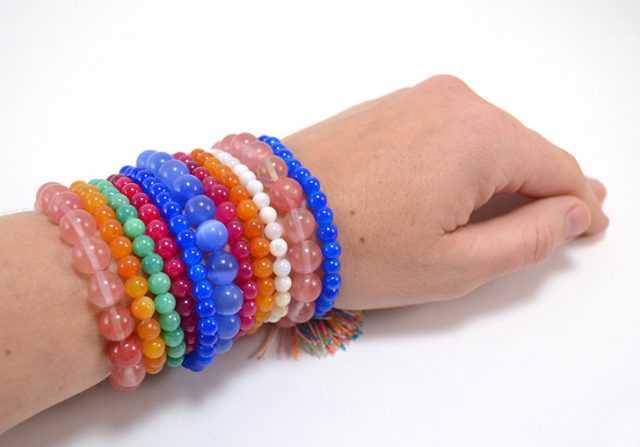 While my beads are man-made I’m not going to stress too hard. I mean, look at that lovely almost stone stack of bracelets? They’re perfect!